No Kilkenny Ireland travel guide is ever complete without mentioning the charming 12th century Kilkenny Castle and the top-rated tourist attractions along the Medieval Mile. You can’t say you’ve seen the best of Kilkenny without visiting St. Canice’s Cathedral and Round Tower, Rothe House and Gardens, Saint Mary’s Cathedral, The Black Abbey, and the medieval museums.

But have you ever wanted to go off-the-beaten-path and discover the hidden gems that are just as magical?

Kilkenny has a lot more to offer and many fascinating, historical spots aren’t listed in the standard travelers’ guidebook. Check out these 9 underrated spots in Kilkenny that beg to be discovered.

Dunmore Cave, while not really a secret, is often missed by a lot of visitors who tend to stick to the city. If you happen to stay in a Kilkenny hotel in the heart of the city, Dunmore cave is just a 15-minute drive outside the city center. Grab the opportunity to discover this marvelous ancient cave, which contains some of the finest calcite formations in Ireland.

An ancient, 9th-century Irish triad poem alluded Dunmore Cave as “the darkest place in Ireland” and we’re not only talking about the literal absence of light. The ancient cave bears a series of chambers, which have witnessed the slaughter of 1000 women and children at the hands of the Vikings back in 928 AD.

Want to witness a deserted 12th-century medieval town? Jerpoint Park in Thomastown Kilkenny, a.k.a “the Lost Town of Newtown Jerpoint”, is the place to be. It was once a thriving town, with a couple of dwelling houses, a courthouse, a woolen mill, a brewery, and a tannery.

Now, there are only a few ruins that could barely give a glimpse of its vibrant past: the standing remains of St. Nicholas’ Church, domestic tower, and a 14th-century medieval tomb (Tomb Effigy of St. Nicholas).

Jerpoint Abbey is another captivating ruined edifice you should see outside of the city center. Founded in 1158, Jerpoint Abbey was occupied by the Cistercians from 1180 until its forced cessation in 1540.

Though time took its toll on this ruined Irish Cistercian monastery, there are a couple of elaborate stone carvings and religious buildings that have managed to survive. Jerpoint Abbey features a well-preserved sacristy, chapter house, day rooms, several fine monuments and tombs, and a sculpted cloister arcade, taking you back to the olden days. Climb Jerpoint Abbey’s charming 15th-century tower and you’ll see fascinating views from the top.

Head south and you’ll discover an Irish National Monument that lies outside the namesake village and by the River Kings: the ruins of the 12th-century Augustine Kells Priory. Also nicknamed “Seven Castles”, Kells Priory is home to seven stoic square guard towers and imposing walls that wrap around the lush three-acre patch of land. 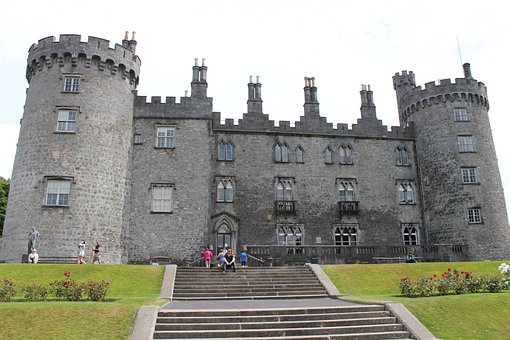 History tells us that the priory was raided and set alight three times within its first 100 years — which explains why it’s made to look more like a fortress than a monastery.

Everything’s Instagram-worthy in Kilkenny. But if you’re in the heart of the city and you’re dreaming of taking a photo of yourself in a narrow alley with a medieval charm, look for Butterslip Lane. It’s a lane that looks and feels taken straight out of the Harry Potter series.

Looking for a serene, picturesque paradise that’s just 20 minutes away from the heart of the city? Visit Kilfane Glen and Waterfall, a six-hectare, romantic era garden dating from the 1970s. Feast your eyes on a cascading waterfall making its way to a rushing stream. Kilfane also features pretty woodlands, tiny bridges, and a cottage, which makes it ideal for walking and unwinding.

7. The summit of Brandon Hill

Reaching Brandon Hill’s summit, which is the highest point in the county, is of the best ways to see the beauty of the Irish landscape. It gives a breathtaking view of the surrounding countryside. It’s also a great group trip idea if you’re traveling with friends.

Are you a fan of eerie abandoned places? Aside from colossal ruins and haunted medieval castles, Kilkenny is also home to the Old Red Iron Bridge. The railway bridge, which spans the river Suir in Waterford was once the longest bridge on the Emerald Isle. It’s been obsolete since 1995 and was left to rust and get overthrown by plant life and grasses.

9. Tullaherin Folk Museum and Round Tower

The tiny yet engaging folk museum illustrates what rural Irish life was like decades or even a century ago. It houses everyday household items, donated by local families to turn their unused belongings (like clothing and houseware) into historic objects worth discovering by generations that follow them. The site also features an ancient 9th-century round tower, which is one of the few surviving round towers dotted around the Irish landscape.